What to do if you have a broken nose

In March of 2007, Duke and the University of North Carolina were playing a basketball game. Duke was down late when Tyler Hansbrough grabbed a rebound and was elbowed in the nose by Duke guard Gerald Henderson, Jr. Bleeding, Hansbrough had to leave the game to get medical attention while a teammate shot foul shots.

The nose is the most commonly injured part of the body. What should you do if you think your nose is broken? First, stop the bleeding! Holding pressure on the squishy part of your nose will help as will using nasal decongestant spray such as Afrin. Ice will help to decrease swelling and pain.

After the bleeding is stopped, your nose will get very puffy! Just like your ankle swells when you sprain it, your nose will swell on the inside and outside if you injure it. Using saline nasal spray will help to clear out secretions and allow the lining of your nose to heal.

You should be seen by a doctor experienced in nose injuries about five to seven days following the injury to allow time for swelling to go down. We will assess your nose in several ways. First, we will want to see if your nose looks significantly different than it did before the injury. Second, we’ll need to assess your breathing- a broken septum or broken nasal bones can lead to nasal obstruction.

If your nose is very crooked or you are having breathing trouble, we may attempt to simply move the broken parts back to where they should be. This can be done in the office or in the operating room depending on your preference.

If the nose is healing crookedly despite our best efforts, you may decide to have a rhinoplasty to correct the damage. Most of the time insurance companies will cover this type of surgery if it is to correct an injury and return your nose to its original shape and function.

If your nose looks like this, you’ll probably want a nose job! This image was copied from the Philadelphia Museum of Art’s webpage. They have an excellent collection of Rodin sculpture, by the way. 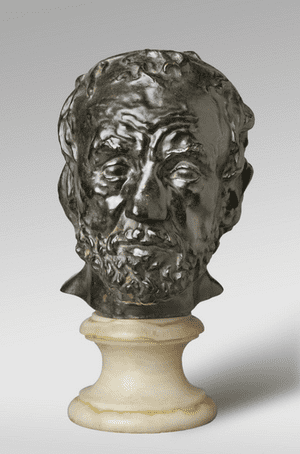